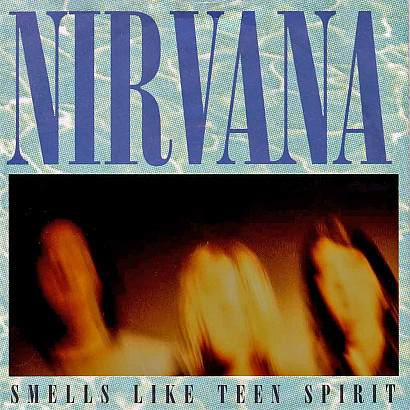 1991 – Nirvana’s “Smells Like Teen Spirit” is released as a single, forever changing the musical meaning of the word “Alternative.”

1966 The Monkees TV show makes its debut, with four actors chosen to portray a pop band based on The Beatles. While The Monkees are a fictional band, they become very real and eventually play on their own recordings instead of studio musicians.

1969 At the Toronto Rock and Roll Revival festival, host Kim Fowley starts a rock tradition when he asks the crowd to hold up lighters for Eric Clapton and John Lennon.

1998 MTV debuts Total Request Live, a countdown of the Top 10 fan-requested music videos, hosted by Carson Daly. By the end of its 10-year run, the show is a cultural phenomenon.

1965 Ford offers factory-installed 8-track tape players in its Mustang, Thunderbird and Lincoln models. This marks the first time 8-track players are widely available, so you can only get the tapes in auto parts stores or Ford dealers. The players have a tendency to chew up the tapes, leading to 8-track roadkill as drivers throw the tangled tapes out their windows.

1970 After eight straight years, The Beatles are finally knocked from their perch as England’s top act in the Melody Maker fan poll… by Led Zeppelin.

With an entrepreneurial career covering decades, Shay Drinkwalter has worked in media content creation, copywriting, and branding for over 40 years.

Shay started at a local outlet now part of Metroland Media Group, covering regional sports, after a political correspondent at the local and national level.

For a two-decade span, she was a stockbroker and then executive of a national securities firm, meanwhile providing content for periodicals, newsletters, national corporations, and not-for-profits.

She is a founding member of the Canadian Freelance Guild/CWA, a former radio show host, and co-founder/editor of a local digital news platform.

Shay is a publicist and curator for a UK indie platform. She covers artists of all genres, from around the globe.

She provides popular music content for an NYC content firm. Additionally, she writes for music, literary, and foodie blogs.

When not writing, through The Buzz Roll Media™ and What’s Our Buzz she promotes podcasts, independent artists, bands and venues.

For most of her story, she was a big city lady. In contrast, she now writes, podcasts & creates from her home studio situated in rural Ontario.